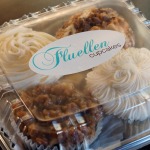 After about 2 months of not seeing my best friend, she finally came back home to visit! So what did we do to celebrate such a long awaited reunion? We went cupcake hunting of course! We decided to try out a place located on Elm St. in downtown Dallas called Fluellen Cupcakes. Since we weren’t familiar with the area, my friend put the address in her GPS and off we went! The only problem was that we had the wrong address. My friend had gotten it from one of the Fluellen Yelp pages and it sent us to a different location. We had parked and walked in search of the shop but couldn’t find it. Once we figured out we were in the wrong area, we hoped back in the car and headed over to Elm St. The shop closes at 9:00 pm, on weekdays, and it was about 8:15 pm. We had about 15 minutes to get there and I was just hoping that they would still have cupcakes.

When we finally found the place, we felt relieved…until we remembered that there’s really no such thing as front row parking in downtown Dallas. You see, we’re what they would call “suburban girls”. I mean, I don’t want to speak on my friend’s behalf, but at least for me, I’m used to parking close to the places I visit. It was dark and there was construction so the streets were confusing. We ended up circling the area for about another 10 minutes. Thankfully as we circled around again, someone who had parked right in front of the shop was leaving. Yes! We finally got our front row parking! And we still had about 20 minutes until they closed. 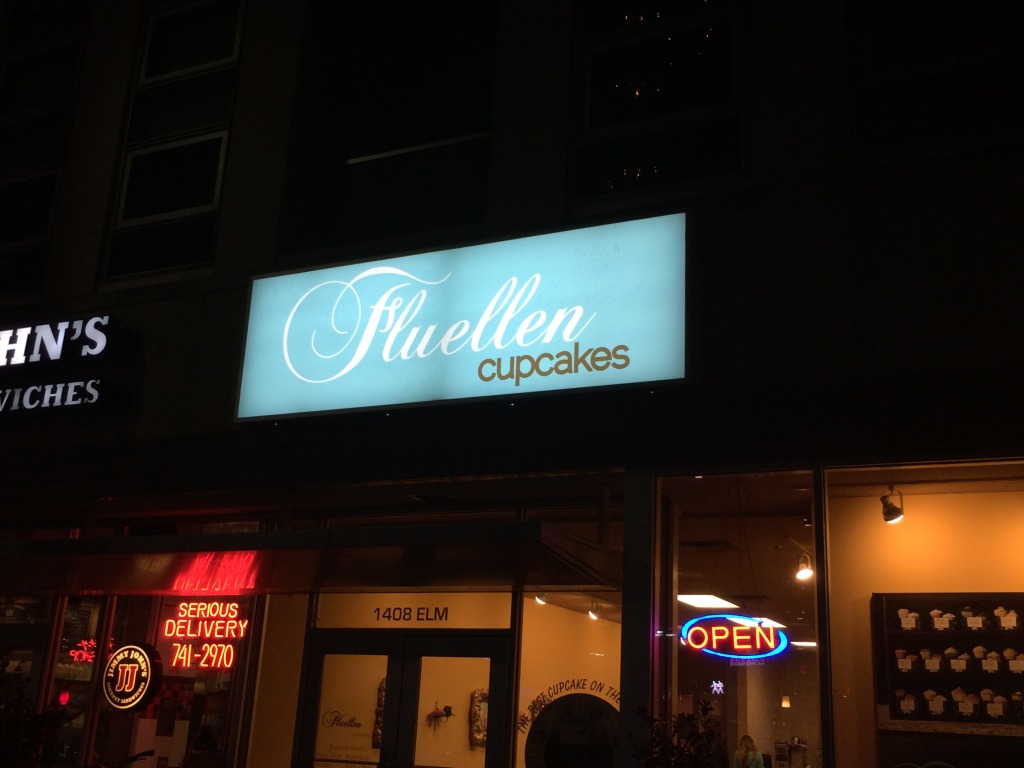 When we entered the store I noticed it was bigger than a lot of the other cupcake shops I have visited. They had a lot of tables to sit down at so you could enjoy your cupcakes. They had a pretty display at the front, but unlike the other shops, they had all of their cupcakes in the back. In the front display, they only had two cupcakes of each flavor. 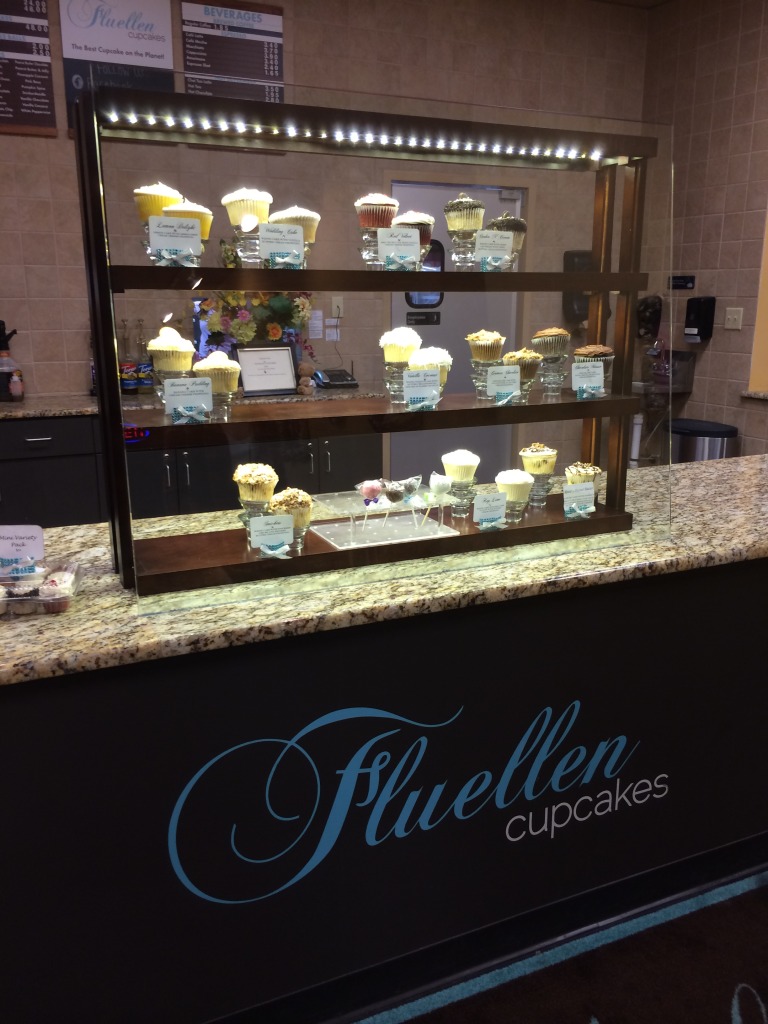 As we approached the front counter the girl started taking down the flavors that they had ran out of. I was fine with this until I saw that she threw them away! These were actual cupcakes that were being thrown away! As I saw the cupcakes go in the trash, I felt like Damian from Mean Girls when Cady breaks her crown.

So a couple things I had learned so far from this experience: 1) if you don’t like seeing food being thrown away, don’t go to a cupcake shop right before they close. And 2) make sure you have the correct address to the place you’re going to. Yelp and other resources aren’t always right. 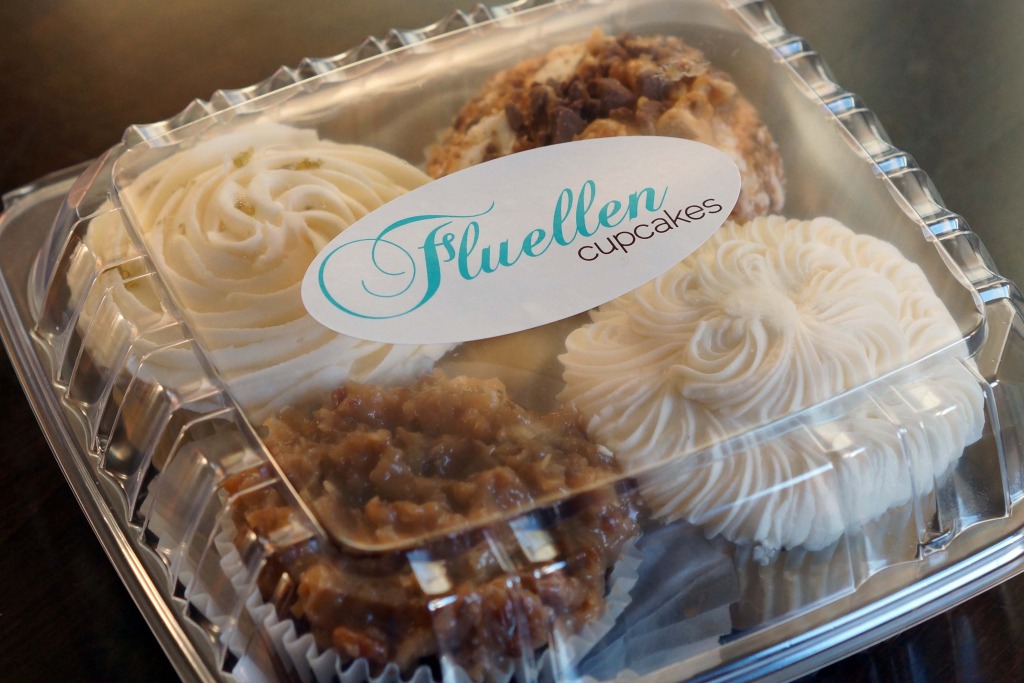 The 3 flavors I had originally asked for were Wedding Cake (basic), German Chocolate (favorite), and Snickers (different). (To see how I choose my flavors click here) Unfortunately, the girl informed me that they had run out of German Chocolate, so I switched it out for Key Lime. My friend ordered Cookies ‘N’ Cream, which I thought was a pretty solid choice. After we paid, they went to the back to get our cupcakes and to my surprise, they had one German Chocolate cupcake left. They said that since I had originally asked for it, they went ahead and gave it to me. And it was for FREE! Right at that moment I knew I was going to like this place. 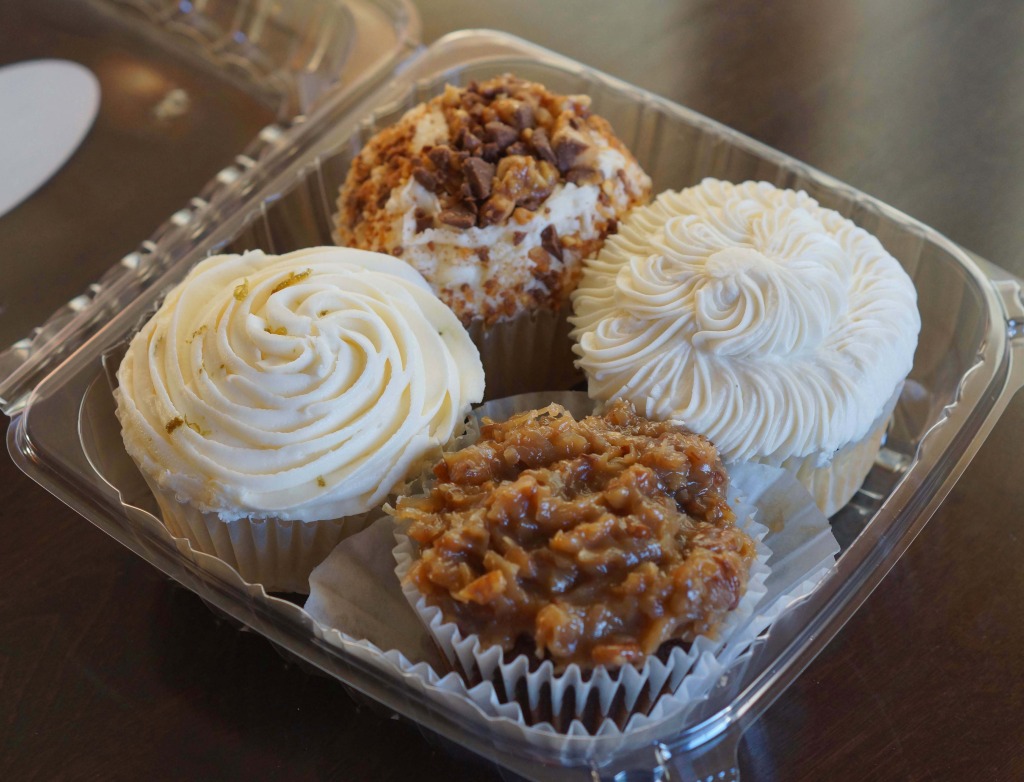 As I bit into the Wedding Cake, I realized how soft the actual cake was. It’s texture reminded me a lot of angel food cake. I know some people complain about their cupcakes being too crumbly and soft, but I actually really enjoyed its texture. 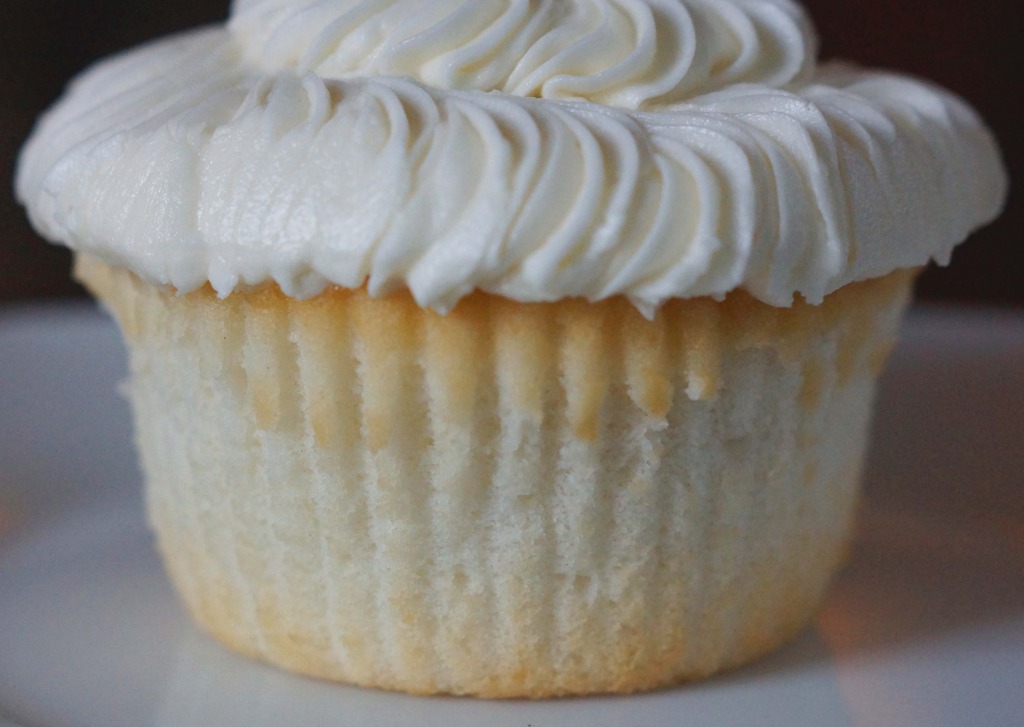 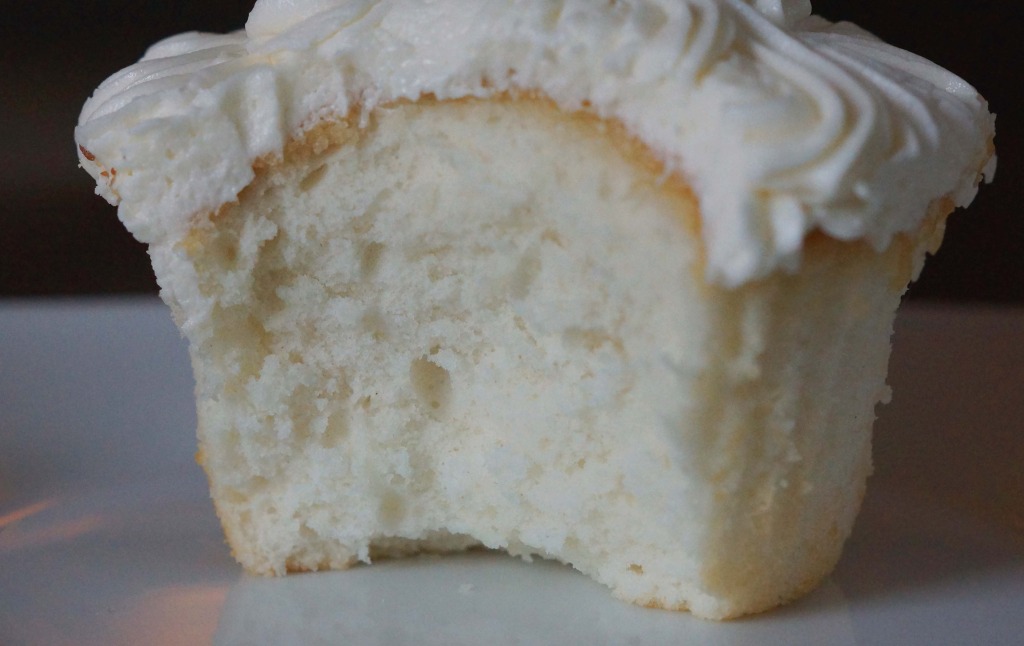 The frosting was not at all sweet and it complimented the cake portion very nicely. I was very pleased with this cupcake. Its flavor was very simple yet satisfying. 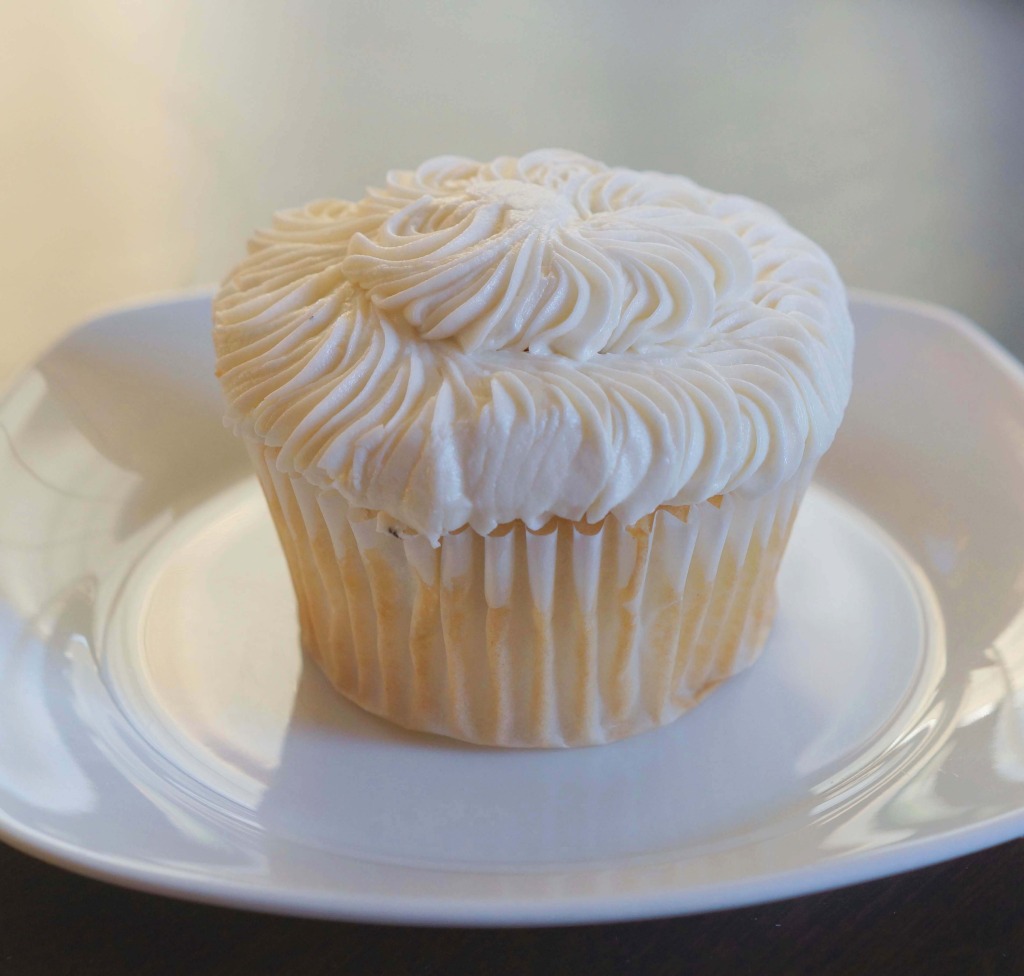 The Key Lime cupcake was the perfect combination between tangy and sweet. Just like the Wedding Cake, it also had a very soft delicate texture. 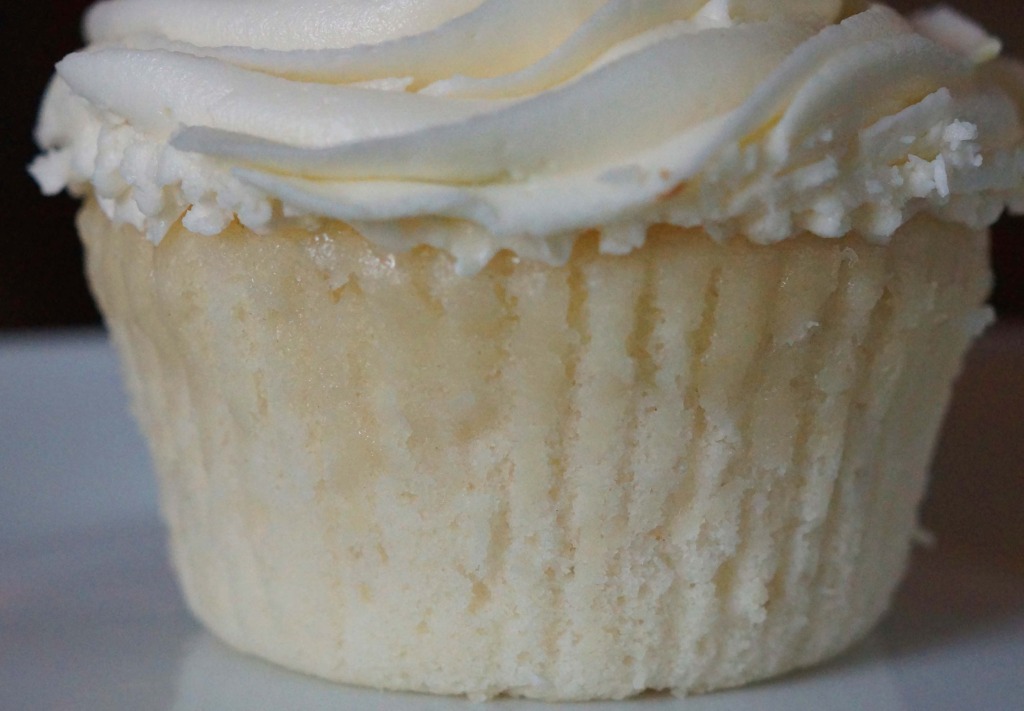 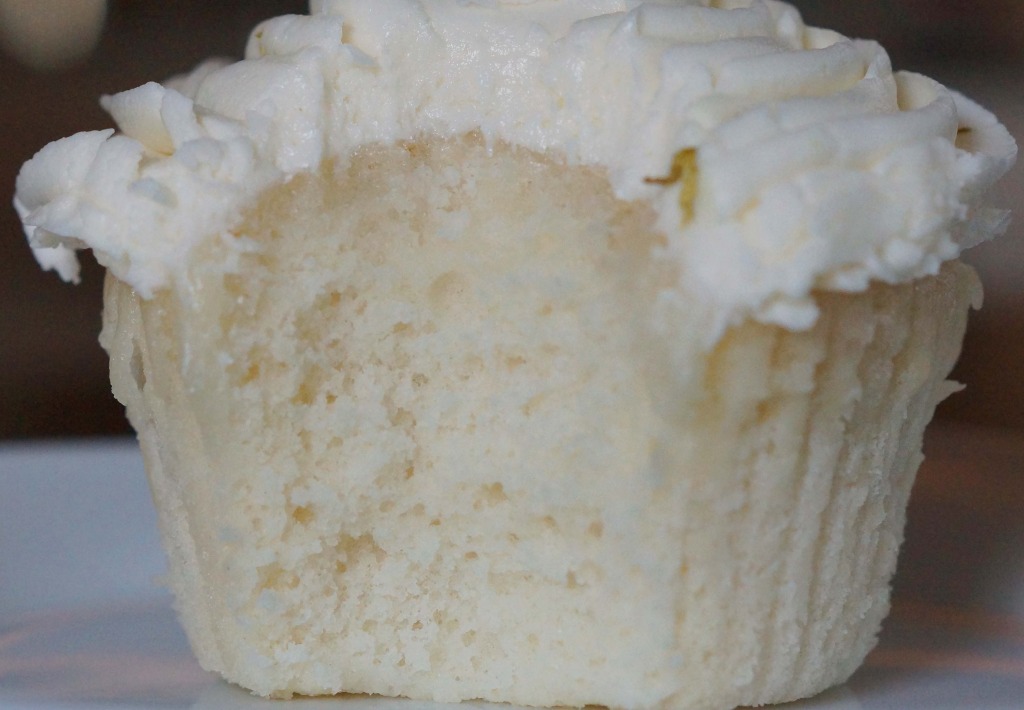 It was refreshing to taste a cupcake that was lime flavored instead of lemon. You could tell that there was lime in both the frosting and the cake. On top of the frosting, there were pieces of lime zest. I thought that this added to the presentation of the cupcake. 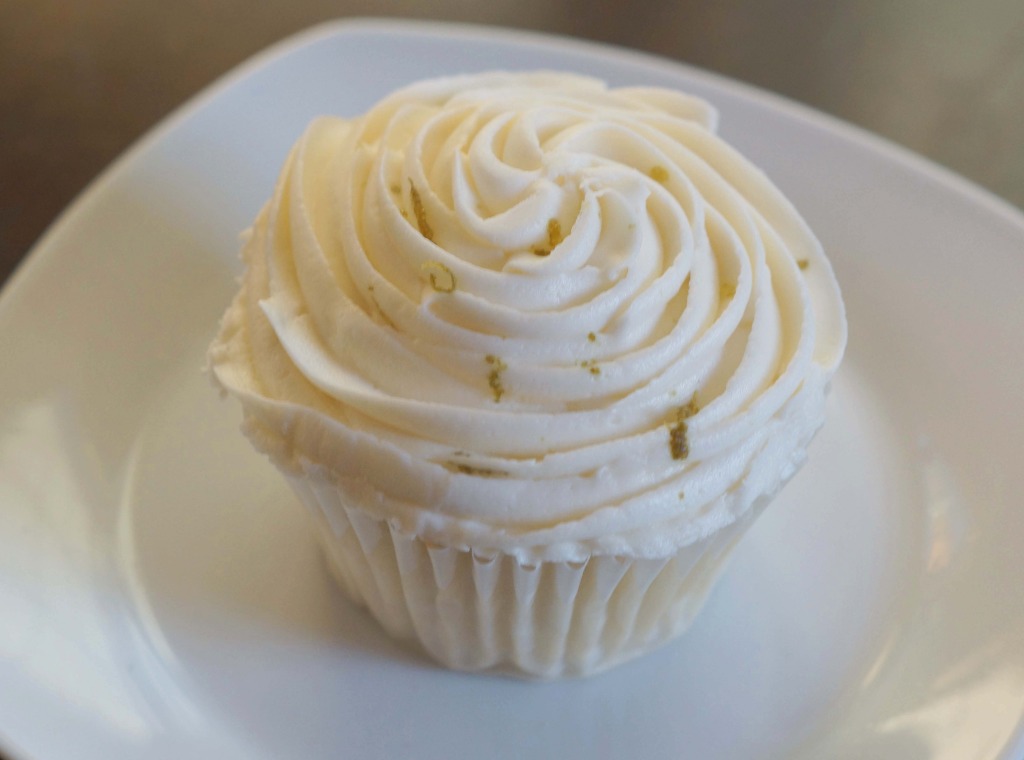 The Snickers cupcake was definitely interesting. It was hard for me judge this one fairly seeing as how I’m not a huge fan of Snickers. But I wanted to buy it because I know it’s a flavor I would usually never try. There was a crushed Snickers bar sprinkled on top of the cupcake. 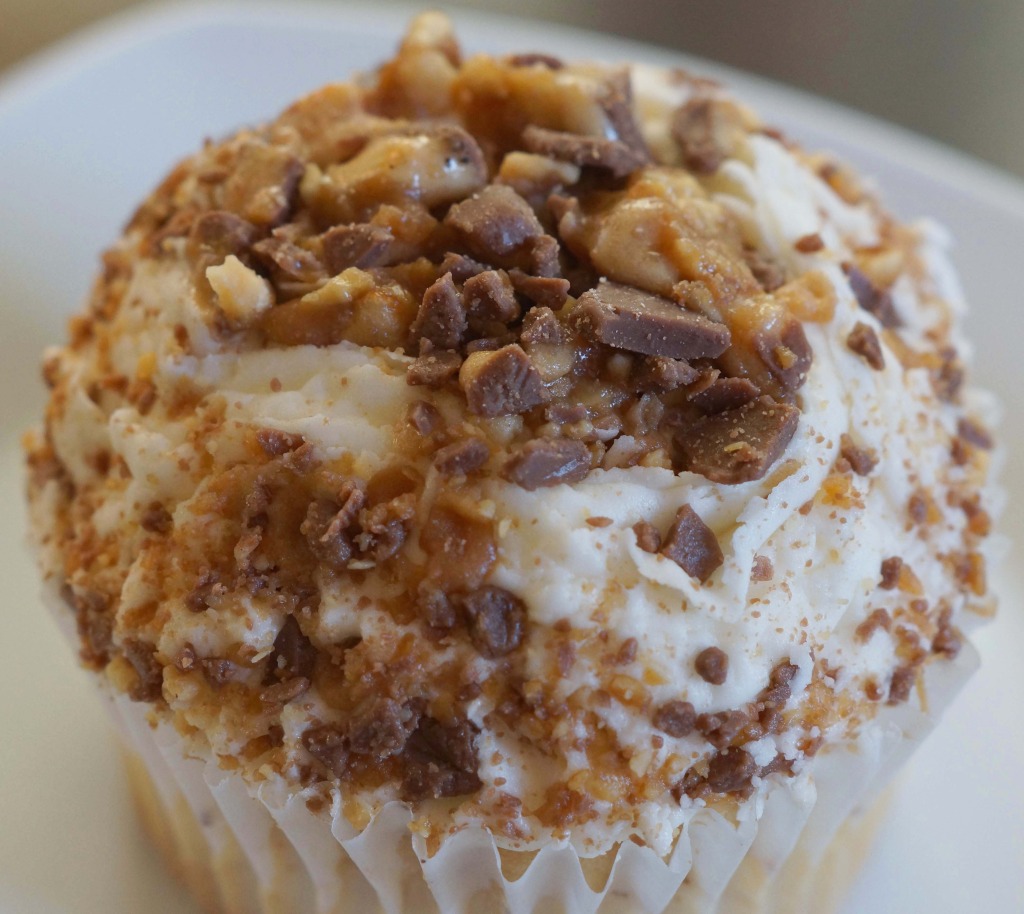 The cupcake portion was just vanilla with bits and pieces of Snickers inside it. I thought that the cupcake tasted just like a Snickers bar. If I had to close my eyes and guess what flavor it was, I would have known right off the bat. If you really like Snickers, then I believe you would really enjoy this cupcake. 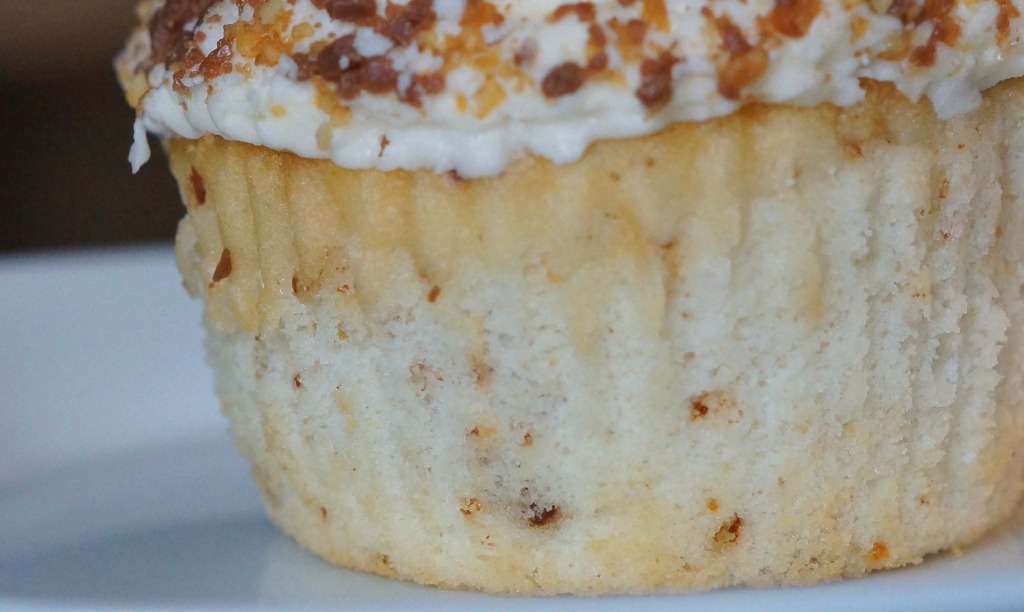 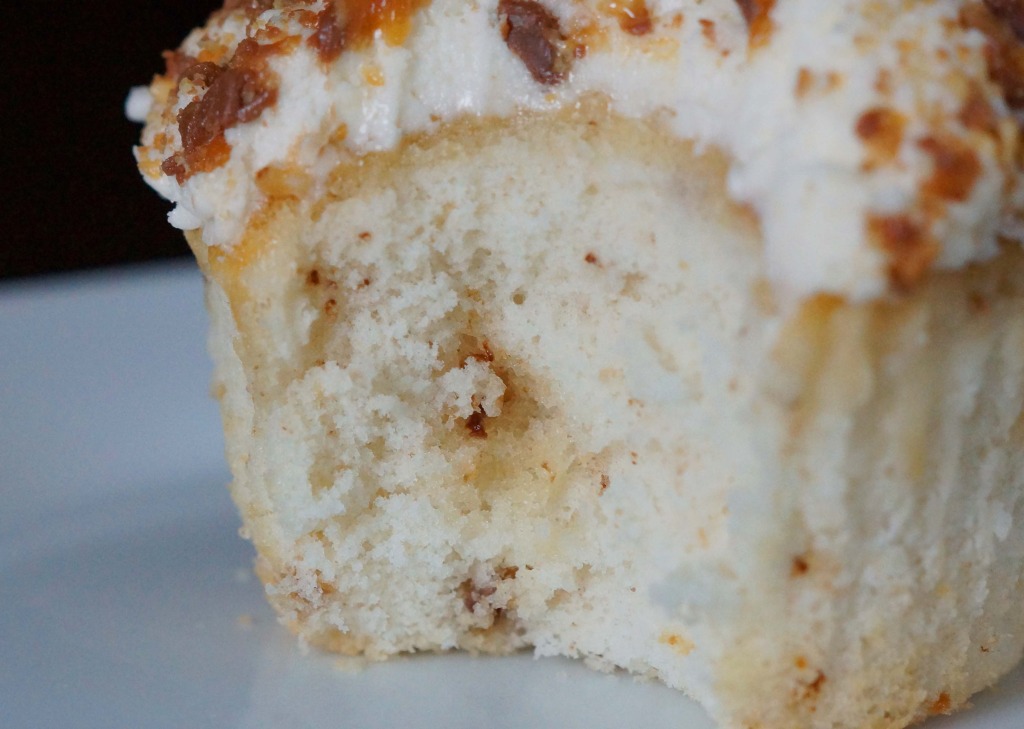 My bonus German Chocolate cupcake was beautiful. It was a chocolate cake with buttercream frosting mixed with coconut and pecans. 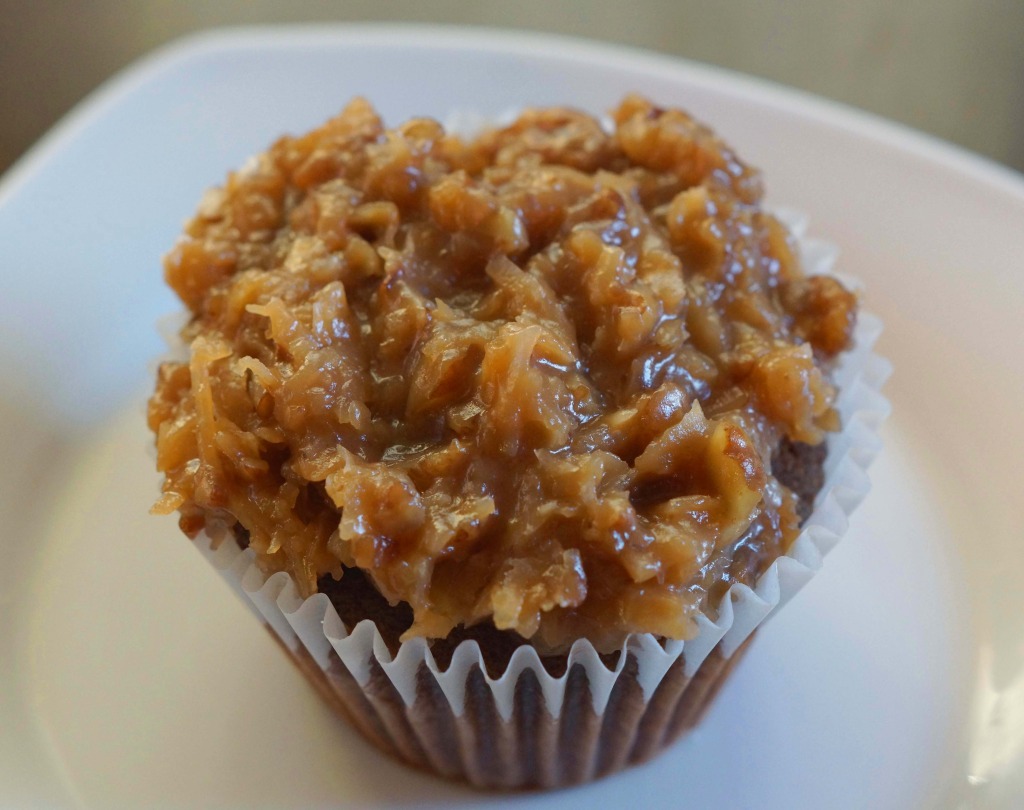 I really really enjoyed the cake portion of it. It was very rich in chocolate flavor, but not at all dense. It was very fluffy and moist. 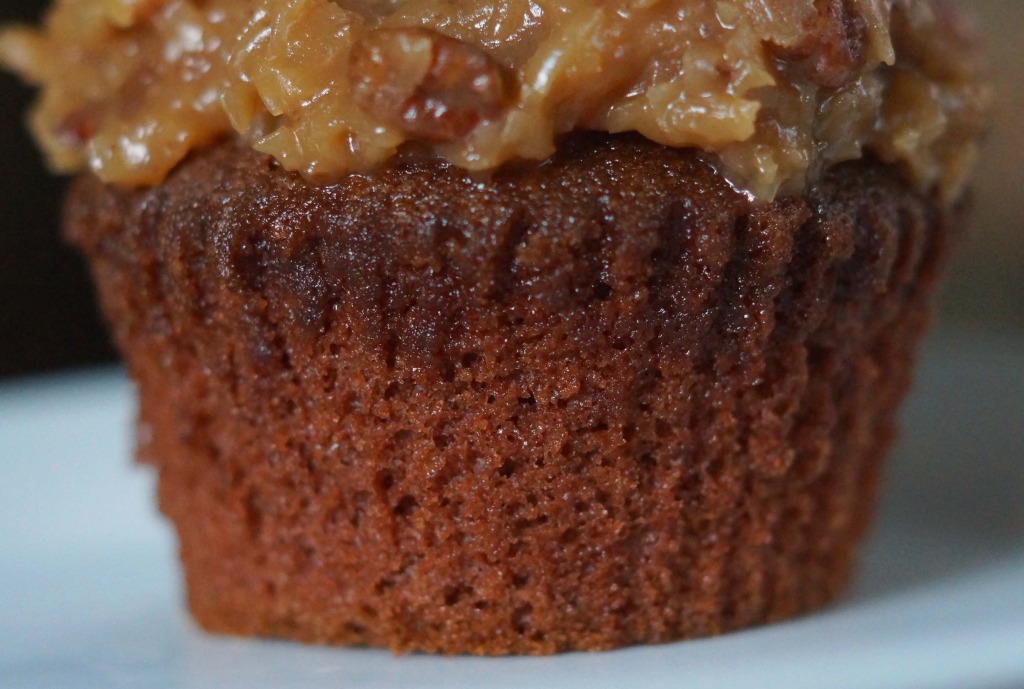 I would have to say that this was one of the best chocolate cupcakes I have tasted so far. I’m very curious in trying Fluellen’s other chocolate flavors because I want to know if they all have the same taste that this one had. I sure hope they do! 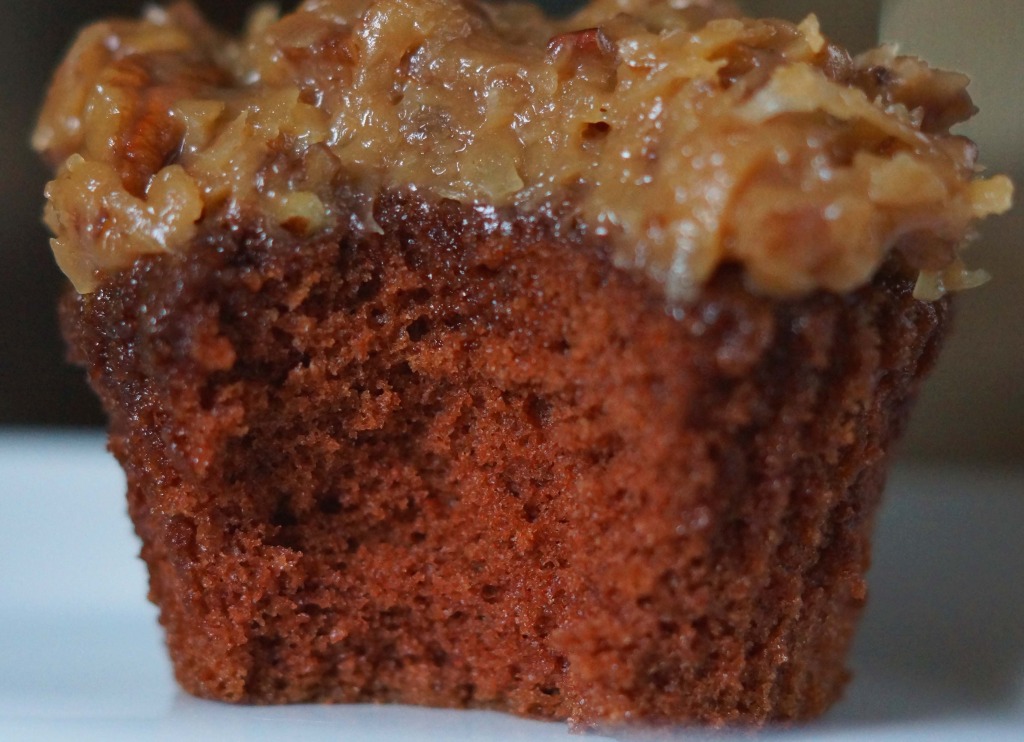 Overall, I was very happy with my experience at Fluellen Cupcakes. Compared to some of the other places I have tried, their cupcakes had very distinct but refreshing textures. I was very happy to see that they were not as sweet as most cupcakes usually are; they definitely hit the spot.